Miss Cocoa Gold was Reserve Grand Champion mare at the Arizona Appaloosa Association Spring Classic at the age of 21.

This show we placed last in halter or second to last, but we won first in Hunter In Hand Non-Pro mares and came in second in in HIH Open mares. No riding due to my schedule constraints.

Cocoa was Reserve Grand Champion mare.Why am I posting this? because Cocoa is 21 years old at this show.

Update: 12/31/2011: Completed a 50 mile endurance ride, did not get credit for the completion as we did not pass the final vet check.

Update: 9/24/2011: Went to the Chandler Vaqueros Saddle Club (CVSC) gymkhana. Cocoa had her fastest barrel pattern yet at 22.145 seconds. We placed in pole bending - 6th place, first time placing in this speedy crowd.

Update: 8/28/2011 - Calizona Champagne and Roses Show. Cocoa qualified for the World show in Camas Prairie Stump Race and Key Hole. We even earned one half a point in Novice Non-Pro Western Pleasure. Cocoa was the Non-Pro high point winner and high point games horse at this show.

Update 5/1/2011: AAA Spring Classic. We had best performance so far in pleasure classes. Not enough to win, but our personal best nonetheless. We did win the games classes.

Update 4/2/2011: We had our annual AAA trail ride. It was so fun! Everyone enjoyed themselves. Cocoa did a great job. I was the sweep rider, all 25 riders came in healthy and on sound horses.

Update 3/5/2011: We had our Arizona Appaloosa Association Banquet tonight.

Update 10/3/2010. I took Cocoa to the Arizona Appaloosa Association Sun and Spot Spectacular show. This was a big show with four judges, 57 horses and 400+ entries.

Update 7/31/2010. Cocoa and I at the Arizona Appaloosa Association scholarship benefit show.

I have taken Cocoa to three gymkhanas since the last show. We are slow, but I am not pushing it. She hit all her lead changes at the Western Saddle Club gymkhana on June 26th, 2010. Her Washington poles time improved to 36 seconds.

I signed up Cocoa and Sunnyboy for the Appaloosa Competitive All-Breed Activities Program (ACAAP). This program awards merits to appaloosas that place in open shows. The point system is the same as the national point system. Today's placing should give Cocoa her first point under that program. 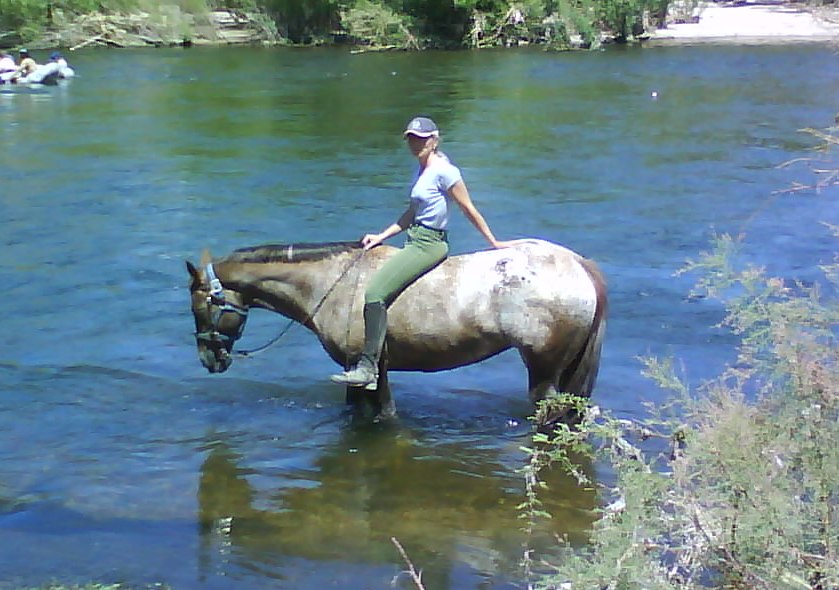 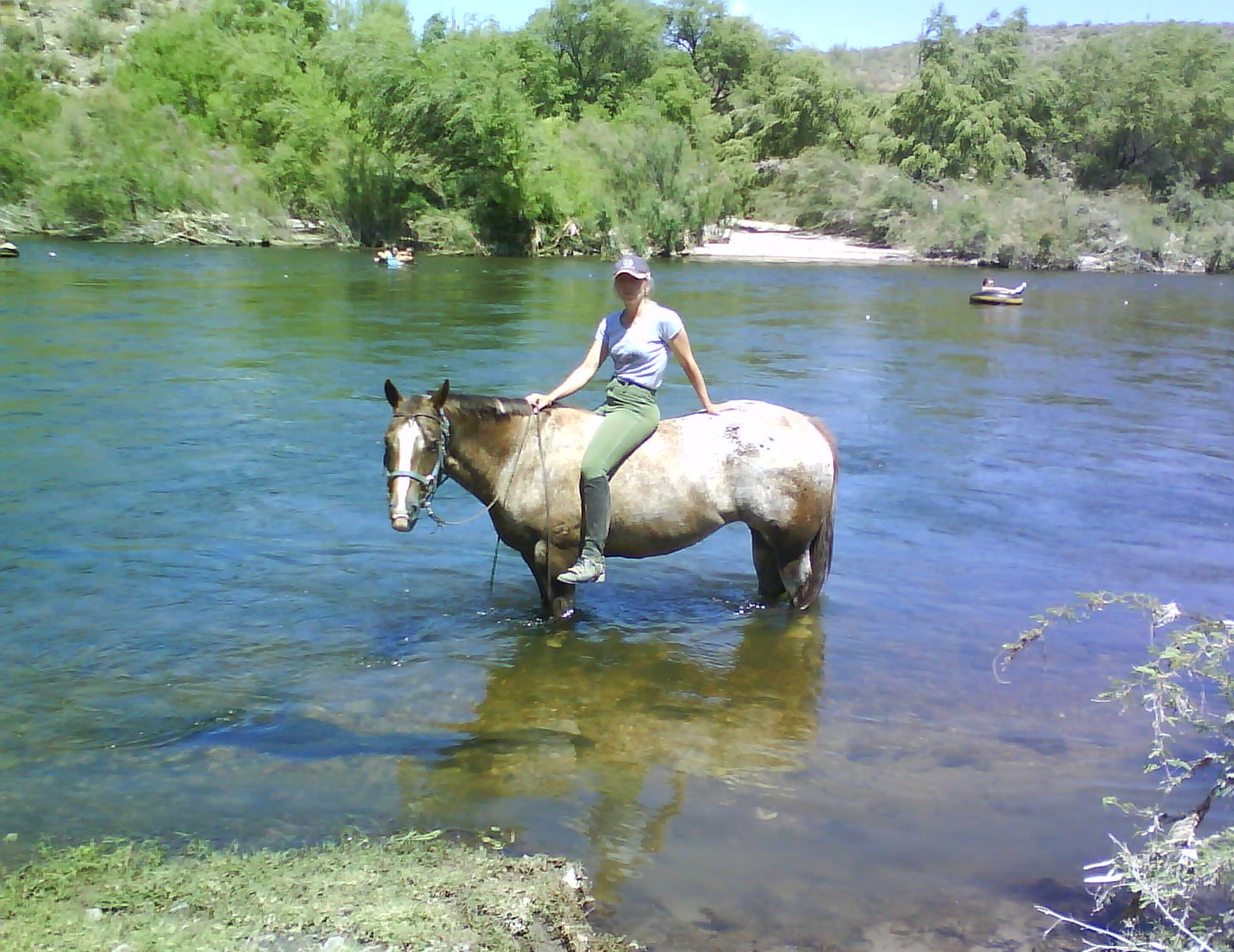 From the trail, to the show:

From Western Pleasure, to poles:

Sonja and Miss Cocoa Gold, May 2009. This was our fifth event of the evening. We started at 6:00 pm. This last run was poles at 12:30 am. Neither of us had ever run a pole pattern. Cocoa was perfect. 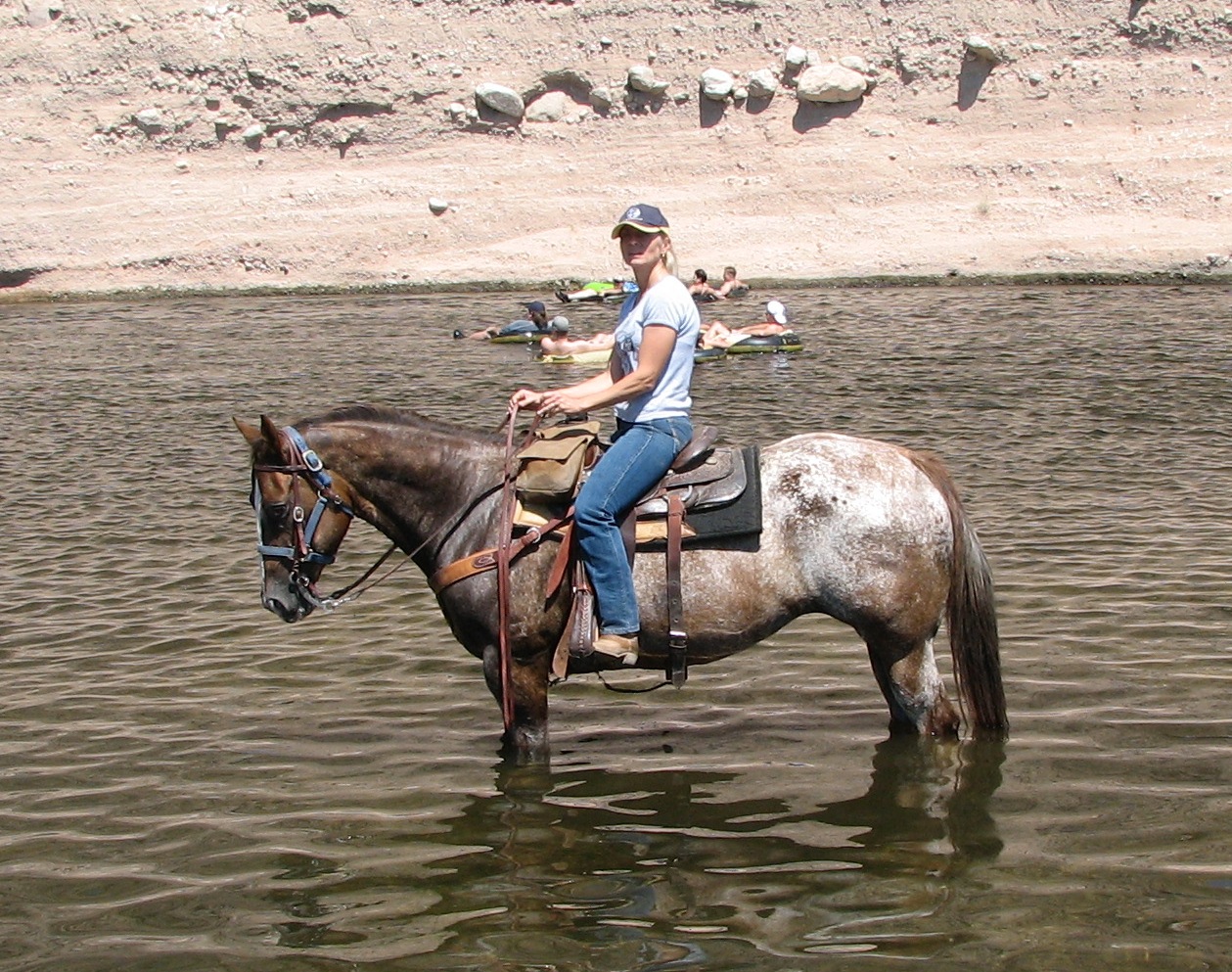 Cocoa's coat has changed color dramatically from her foal picture. This picture is poor quality, but it shows the color Cocoa was born with:

The bold print in the pedigree below show Appaloosa bloodlines.

Cocoa's foals. One died before registration.

Sire's Dam: April Doolin, PC 4580 (Fancy Doolin x Poso Larketta). Foaled: 4/1/1975. Color: Chestnut. Pattern: Solid. No photo available. Owned by Tim and Virginia Webber. She produced eleven (11) foals, of which nine (9) were halter and/or performance point earners. Her get earned 11 ROMs and 2 Bronze medallions. Here are some of her most noted get:

Sire of Sire's Dam: Fancy Doolin, was a 1971 stallion (Cuchara High Hand x Roving Bill, AQHA). This horse was shown extensively through1984. He placed 8th in Aged Stallions at the 1975 National Show out of 54 entries. He earned ROMs in Halter, WP and HUS. Click here to see more details on Fancy Doolin.

Following info from AQHA records:
Catsys Mccue is a sorrel Mare foaled in Nebraska in January of 1968.
No show points on record.
Owners:

Oops! This site has expired.

If you are the site owner, please renew your premium subscription or contact support.